Diving into the Legend

In 1954, TUDOR set out on a new path which would contribute to forging its legend. It was in that year that the brand’s first divers’ watch, the TUDOR Oyster Prince Submariner reference 7922, saw the light of day. Designed from its origin to fulfil exceptional criteria of durability, reliability, precision and waterproofness at a moderate price, it quickly positioned itself as an instrument of choice for professionals. Over the next 45 years this original tool watch continuously evolved to ever better meet the specific requirements of the many types of divers who were clients of the brand.


The first generation of TUDOR Submariners saw numerous versions, and through them, a notable advance in terms of performance; for example, the maximum functional immersion depth, set at 100 metres initially, reached 200 metres with the introduction of reference 7924 in 1958. During this period, multiple experiments were conducted to determine which characteristics were indispensable to the ideal divers’ watch. Each reference in the 7900 series thus featured subtle specificities which, whether or not they were retained in the development of the product, contributed to its legend. Finally, with the latest variation of reference 7928, recognisable by its round crown guards, it was in the first half of the 1960s that the general lines and technical specifications that constituted the TUDOR Submariner were established.

The year 1969 saw the dawn of the second era of the TUDOR Submariner’s history, which would last until 1999, the date of its last appearance in the catalogue. While the general foundations of the product were laid by the 7900 series, its evolution continued. From a technical point of view, the movements used until then were replaced by ETA self-winding movements. Aesthetically, 1969 saw the TUDOR Submariner present a famous new face. Developed for the explicit needs of diving, it was characterised by unique dials with square hour markers and matching hands, known to collectors by the name “snowflakes”. It remained in the catalogue until 1981. As of 1976, models with smaller case diameters also appeared in the catalogue.

In parallel with its civilian marketing and sales, the TUDOR Submariner served the members of important armed forces. Its successive adoption by the Marine nationale française (MN), the US Navy (USN) and other military organisations spoke volumes about the watches’ robustness and reliability.

While the first TUDOR divers’ watch, reference 7922, dated from, it was several years before reference 7928 marked the first mention of a TUDOR Submariner in the brand’s general catalogue. Meanwhile, TUDOR was experimenting with a number of technical solutions to perfect its ideal divers’ tool. This absence of marketing documents did not however keep the first-generation models from being sold and immediately finding an appreciative audience, notably the naval military organisations of major countries.

The last reference of the 7900 series, the 7928 included crown guards to protect its winding crown, ensured waterproofness to a depth of 200 metres, and was equipped with a self-winding movement. This list of characteristics was common to the Submariners that TUDOR would market until the end of the 1990s, making reference 7928 the sum of experience acquired over many years of experimentation in the field of divers’ watches. 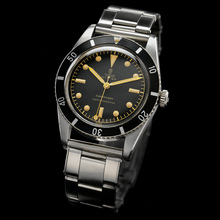 Reference 7923 was the only TUDOR Submariner to have been equipped with a manually-wound movement.

This technical choice made it a particularly flat divers’ watch.

Thanks to its screw-down case back and crown, characteristics proper to the Oyster case, as well as its domed crystal... 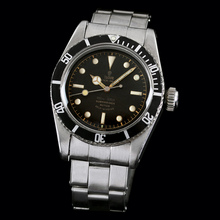 Renamed “Big Crown” by collectors, an allusion to its 8 mm winding crown, reference 7924 appeared in 1958.

At first glance similar to its predecessors, it presented a fundamental innovation in that its waterproofness was from then on doubled to a maximum immersion depth of 200 metres... 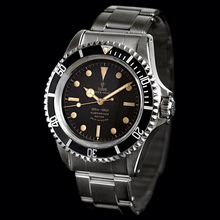 In 1959, with the advent of reference 7928, TUDOR for the first time proposed the principle of guards to protect the winding crown from shocks.

The variations in the execution of this protection were an illustration of the dynamic continuous evolution of the same reference.. 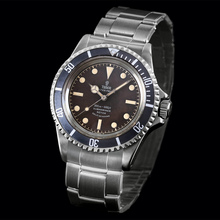 To begin with, its case had a new rounded version of crown guards. After the square or pointed shapes of the older versions of reference 7928...

As of the late 1960s, TUDOR began to present versions of the Submariner based 1972 on its ideal divers’ watch, whose characteristics were established with the last variation of reference 7928. Indeed in 1969, two new references appeared simultaneously in the catalogue,7016 and 7021, equipped with new self-winding movements and featuring new dials with characteristic square hour markers and hands, known in collectors’ circles as “snowflakes”. Reference 7021 was also the first TUDOR Submariner to offer a calendar function. Finally, an alternative combination of dial and bezel in blue was introduced.

The last years of the TUDOR Submariner line would also witness significant innovations with the introduction of highly resistant sapphire crystals, directional bezels with notching, as well as dial and bezel design variations.

In total, from 1969 to 1999, more than 20 different references with numerous variations, all retaining the principal TUDOR Submariner characteristics, would be produced. 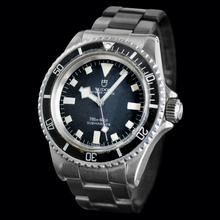 With them began the second generation of TUDOR divers’ watches. The example of reference 7016 dating from 1969 presented here shows the detail of certain characteristics, the most visible being the dial and hands... 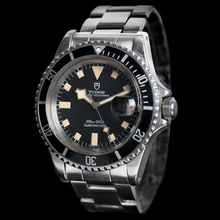 The TUDOR Prince Oysterdate Submariner reference 7021 appeared at the same time as the 7016, but in addition offered a calendar function at 3 o’clock.

Its Cyclops-type Plexiglas crystal was the same type as that of its contemporary.

In addition, it included a magnifying lens placed over the date aperture for easier reading... 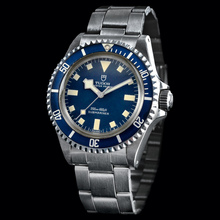 In the mid-1970s, reference 7016 was replaced by reference 9401/0, which welcomed a higher-performance movement with the ETA calibre 2776, notably allowing more precise time-setting thanks to a stop seconds function.

The combinations of dials and bezel available for this reference total four in number: blue or black with “snowflakes” hands and hour markers... 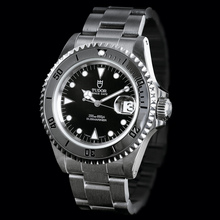 Reference 79190 arrived in the catalogue in 1995. The last TUDOR Submariner reference produced, it included many interesting developments, including a sapphire crystal with a Cyclops lens, round hour markers, and a unidirectional rotatable bezel with notching...

There is no better proof of quality for a tool intended for professionals than its adoption by organisations whose main activities push the use of the item to its ultimate limits. Acclaimed throughout their long history by the Marine nationale française (MN), the US Navy (USN) and other important military organisations throughout the world, which used them to equip their elite personnel, TUDOR Submariners thus extended their reputation for quality and robustness.

The TUDOR divers’ watches delivered to these military organisations were neither custom-designed nor specially developed. They were just references listed in the catalogue, which these organisations chose. As a rule, their only distinction was an engraving on the screw-down case back. Thus for example the TUDOR Submariners used by the Marine nationale française bear the initials M.N. accompanied by the last two digits of the year in which they were delivered.

Since they were used intensely in extremely harsh conditions for many years, it is very rare that examples surviving to this day are in perfect condition. However, the relative rarity of these watches, their respective stories and the world of visions they evoke, make them a highly prized collection theme. The following pages offer detailed descriptions of a non-exhaustive selection of TUDOR Submariners engaged in military roles. 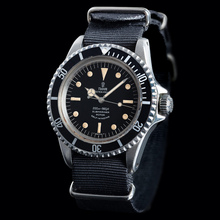 On its screw-down case back it bears the engravings of supplies belonging to the American navy (US Navy or USN) as well as a date. The inscriptions were displayed on three lines: U.S.N., ST 2/015, OCT.68...

Marine nationale divers were known to have used parachute belts to make watch straps, as on the example of reference 9401 presented here, dating from 1977.

The elasticity of this material made the watch comfortable to wear and allowed easy adjustment over a diving suit. The back of this watch bears the engraving M.N. 77... 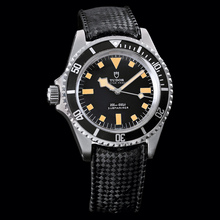 The singular example of reference 94010 shown here and produced in 1981 was a special 1984 order placed by a left handed officer instructor within the Marine nationale.

The particular arrangement of the crown of this watch did not have a different dedicated reference number...

TUDOR Prince Submariner Saga: The Power of a Icon

Tudor has been revisiting its past for a while with timepieces inspired from those that have contributed to writing some of the finest chapters of its history.


by Vincent Daveau – Among those timepieces is the Black Bay. This particular watch represents best the legacy of all robust and efficient diving watches that have contributed to the worldwide recognition of the company; a company whose potential deserves to be put back in the spotlight. The brand was founded on February 17, 1926 by the maison “Veuve de Philippe Hüther” on behalf of Hans Wildorf and under the name “The Tudor”. However, its actual production only started in 1946. The brand understood immediately that it had to strike the right balance between the Rose and the Shield to meet the requirements of modern-day knights looking for products that would support them in carrying out their favorite activities.

What makes the Tudor BC Submariner so intriguing is the fact that it was developed in collaboration with the French Navy - the Marine Nationale.


by Ross Povey – Ask any Submariner collector what their favourite vintage model is, and many of them will tell you it’s the ‘Big Crown’. Whether a Rolex 6538 or Tudor 7924, the so-called ‘Big Crown’ (BC) watches are a grail watch to many a diving watch enthusiast.

read the full article
The History of TUDOR Continues…